The Overview of Measurement Methods of Particles

After a long period of development and improvement, there are more than 200 measurement methods based on different working principles. Light scattering has gradually attracted people’s attention and has been favored since 1980, and has been widely developed in recent years. Its production practice technology has also been substantially improved. With the continuous enhancement of integrated chip functions, a dust concentration sensor has been initially formed based on light scattering theory. The sensor is small, light, sensitive, and easy to be used. With the advent of the Internet and the era of intelligence, the application of light scattering principles combined with research on the laser and microelectronics technology to achieve lightweight and reliable sensors has always been the goal that the industry highly praises and pursues.

1. Optical detection of particles
(1) Direct imaging
The so-called direct imaging is a method that analyzes and calculates the concentration of particulate matter through image processing technology after collecting pictures of the detection area, and the detection range is about 1 to 1000pm. This method is greatly influenced by humans, and the wavelength of light and the magnification of the lens play the most important role in the resolution of the microscope. Therefore, the smaller the particle size is, the greater the error becomes, and the sampling rate is low. Therefore, the detection of distribution and concentration of the particle size is not easy. The high price of optical professional equipment limits the development of its application.

(2) The optical holography
Compared with ordinary photography, optical holography uses the reflected light of the object to form an inverted real image through an optical lens and records it on the photosensitive film while recording the complete wave field on the plane. The amplitude and phase of the light wave are also accurately recorded. Gabor encodes identifiable quantities into a photographic film by converting the phase to a background wave, a recording known as a hologram. By illuminating the hologram with a suitable light wave, the recorded wavefield will fully appear. The observer looks at the light beam as if he can see the real object in three dimensions. Holography can be used to detect aerosol particles with a detection range of sub-micron to millimeter order of magnitude. 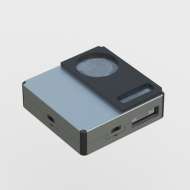 hamish vercoBusinessAugust 19, 2022
The most recent research report on Meta Xylylene Diamine market analyzes and considers all of the important factors that affect …
END_OF_DOCUMENT_TOKEN_TO_BE_REPLACED

roy limBusinessApril 27, 2022
Influencer marketing generates a $5.78 return on investment on average for every dollar spent, making it a very effective marketing …
END_OF_DOCUMENT_TOKEN_TO_BE_REPLACED

Absolute NewsBusinessMay 5, 2022
This Medical Device Refurbishment Market research report contains a complete background analysis of the industry, which includes an assessment of the parental …
END_OF_DOCUMENT_TOKEN_TO_BE_REPLACED